Today is the first day of Wonder Con and the unofficial start to convention season.  Brought to you by the same people who bring you Comic Con International in San Diego, Wonder Con is like the smaller brother of said convention.  In fact, I have heard it said that Wonder Con is what Comic Con was like 20 years ago, before it blew up into the mega event that it is.

Sadness hit me last year when I heard a rumor that Wonder Con was moving to Anaheim.  In the past, the “Home of the Mouse” has tried to court Comic Con to come north, but they ended up staying in San Diego.  The eagerness to have a comic book convention was still there and if you can’t have the big one, why not go for its younger sibling?  I had thought (read: hoped) that is would only be for one year, but after reading an interview with Comic-Con’s David Glanzer on comicsreporter.com I am not too optimistic.

When asked about the Moscone Center in San Francisco and convention space in general, Glanzer responded:

“Space is always very important. Not only exhibit space, but meeting space and hotel space. Anaheim offered several things that other centers didn’t. For one they had dates that were available and close to the calendar for typical WonderCon dates. They also had the exhibit space and meeting space and a hotel right across the plaza.”

And when asked about where Wonder Con will be next year:

“Well so much of it really rests on San Francisco. Currently it’s been challenging as we can’t secure dates with a longer lead time than six months. As any exhibitor knows, six months isn’t really convenient to planning your year. We hope to get dates with a longer lead time, and when that happens I think you’ll hear the announcement very quickly. So, basically, once we know, we’ll let everyone know.”

A con’s gotta do what a con’s gotta do.  In the end, Wonder Con will have to go where it makes the most financial sense.  I get that.  But I hope that San Francisco rallies and that Wonder Con comes back home…to stay.

You can read the entire interview with David Glanzer here. 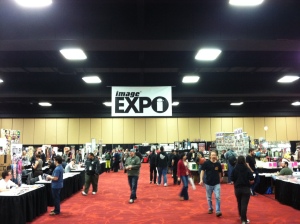 With Wonder Con leaving for Anaheim, the bay area was left without a major comic book convention.  Sadness filled the land.  Until a shinning beacon of hope came from Berkeley pointing the way to the Oakland Convention Center: Image Comic Expo!

Image is an independent “comics and graphic novels publisher formed in 1992 by seven of Marvel Comics’ best-selling artists. Since that time, Image has gone on to become the third largest comics publisher in the United States.”  As some people look at it, there are the “Big 2” Marvel and DC, and the rest.  And sadly, this is something that I forget from time to time.

Image Expo was this last weekend and I went on Sunday to check it out.  At first I was taken aback that there wasn’t hoards of rabid fans swarming the streets of Oakland.  And once I got into the convention floor, I had elbow room and could breath.  This was a little strange for me as I am used to the battle that is San Diego Comic Con.  But once I walked around I realized I had struck gold!  This was fantastic!  It felt like a convention should feel: fans, creators and retailers coming together to celebrate the world of comics.  No big movie booths, no massive video game stations, just comic books and their creators.  And I got to talk to the creators.  Not just “hey could you sign this” but have a conversation with them.  I mean I have never been to a con where Brian K. Vaughn (Y: The Last Man) didn’t have a mob around him, much less NO LINE!  Plus I got to chat with Rob Guillory (Chew), Jim Zub (Skullkickers) and, the man himself, Robert Kirkman (The Walking Dead).

All in all, it was a great time.  I hope that this is not the last Image Expo!